We had an amazing first week with The Retreat on store shelves! I couldn’t be more pleased — and couldn’t be more grateful to those of you who have pre-ordered or bought a copy, put your photos of the book on social media, and generally made me feel like a very lucky writer indeed.

If you’re looking to read up on The Retreat and find out what all the fuss is about, you can read reviews in the Toronto Star, the Globe and Mail, and the Telegram — or check out these interviews in the Newfoundland Quarterly or at Resilient Writers. Or find out more about my process, what I like to read, and how I think about writing in these articles for CrimeReads, the Literary Review of Canada, and Macleans.

I’ll tell you the best ways you can help promote a writer or a book you love, whether that’s me or someone else:
— Buy the book! A pre-order is nice, but any sale is a good sale, especially in the crucial first weeks when a book is trying to gain traction or momentum.
— Tell yo’ friends! If you love a book, throw a photo up on Instagram or Facebook or Twitter or wave it about on TikTok, whatever platform you like to use. (I’m sure there are others but I am in my 40s, let me be.)
— Tell some strangers! A great way to help a book get better attention is to post a positive review on Amazon, Indigo, Barnes and Noble, Goodreads… you get the picture. In the case of the Big Online Retailers, the number of reviews actually affects how much or how little a book is “shown” or promoted, so your two cents makes a great deal of difference.

And of course, I know so many of you have already done these things for me, and all I can say is a very humble thank you. You have all made a huge difference in my life, and your support is what allows me to keep doing this job and living the life I really love. So, thank you, truly, with all my heart.

GIVEAWAY ALERT! We’re launching The Retreat in just over two weeks, and the #giveaway fun starts now! Register for the launch by midnight, Sunday, July 11th for a Monday morning draw! Three lucky winners will receive a “The Retreat” cocktail kit, created specifically for our launch party by Terre restaurant in St. John’s, and a signed copy of the new book

Galleys for the American edition of THE RETREAT arrived last week and they! are! gorgeous! I’m so excited to share this book with the world, and the galley — or Advanced Reader Copy, as we refer to them in Canada — are the first big step in that direction.

You can pre-order THE RETREAT right here, right now, in Canada — or here, in the United States.

*So pleased to share that HYSTERIA is on the shortlist for the Thomas Raddall Atlantic Fiction Award, along with books by Sharon Bala and Lisa Moore, making us a kind of Newfoundland Trifecta for this year’s prize– or the meanest gang you ever saw. You can catch me reading from the book at the Welcoming Reception on June 5, at the GEO 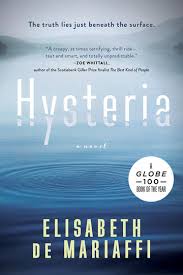 Shortlisted authors Christine LeGrow and Shirley Anne Scott, of Saltwater Mittens fame, will also be on hand with a display of Newfoundland knitwear and knowledge. The event is free and open to the public.

*Starting this week, I’m also on faculty at the Humber School for Writers. If you’d like the support of a mentorship to help you finish your book-length manuscript, there’s still a few days left to sign up! I’ve worked with poets, fiction writers, and non-fiction writers alike, both at Humber and in Creative Writing programs at UBC and MUN. The Humber certificate program can be done from anywhere, and lasts from now until mid-December, giving us lots of time to sculpt that manuscript into shape. Want to sign up? All the information is right here.

*While I mostly have my head down this spring, trying hard to get a full draft of the new novel finished, I will be in Halifax in mid-July as a keynote speaker at the Kings College Humanities for Young People Symposium. I’ll be talking about Fear (yikes!), and my fellow keynote is the estimable activist and journalist, Desmond Cole. The symposium is open to the public, and I’ll post more information on the event as summer draws near.

*Last but not least (not by a long shot!), did you know that HYSTERIA is now out in paperback? Yes she is. And, I have to say, I can’t think of a better summer read for your cottage or lakeside cabin. Order it up right here.

A few weeks ago I had the best conversation ever with Mark Montefiore and Patrick O’Sullivan at New Metric Media, and the end result of that convo is this awesome news: New Metric has optioned television and film rights to The Devil You Know. All the details in the press release below, and rest assured that I am beyond thrilled. Go team!

For fans of Gone Girl and Broadchurch, THE DEVIL YOU KNOW is a riveting thriller set in the early 90’s about a rookie reporter assigned to the Paul Bernardo investigation, whose memories and personal research into the murder of her childhood best friend bring danger right back to her doorstep. From one of Canada’s most exciting new literary voices comes a spine-tingling suspense, with a strong female focus and point of view, about secrets long buried and obsession that cannot be controlled.

New Metric Media is developing the novel as a one-hour continuing drama series, and is currently focusing on bringing on an experienced television writer to adapt, with de Mariaffi serving as consultant.
THE DEVIL YOU KNOW continues New Metric Media’s foray into scripted drama, with McMurray recently announced in development with the CBC, and an upcoming mini-series with another Canadian network to be announced this summer. These go along with a thriving comedy slate, including the production of two series, Letterkenny with Bell Media, and What Would Sal Do? with Superchannel, set to go to camera this summer.

“De Mariaffi delivers the requisite heart-in-mouth moments of pure paranoia, but she balances these thrills with shrewd character studies and the odd nugget of wisdom. Like the words of a mother who explains why women are ravenous readers of true crime stories: It’s not to scare ourselves, ‘it’s so we learn how to get away.’” –New York Times Book Review
“Manages simultaneously to be funny, sweet, hip, and utterly terrifying. Elisabeth de Mariaffi has written a smart, unique thriller.” – Alafair Burke, Author of ALL DAY AND A NIGHT
“The chiseled prose that characterized de Mariaffi’s Giller-longlisted short story collection HOW TO GET ALONG WITH WOMEN is on full display… Mariaffi also nails the callous dehumanization and gallows humor that is a constant of media workplaces.”-The National Post
Elisabeth de Mariaffi is represented by Samantha Haywood of Transatlantic Agency. THE DEVIL YOU KNOW is published by Harper Collins in Canada, Simon & Schuster in the USA, and Titan Books in the UK.

Last post for a Friday evening — what a whirlwind this day has been. Two great reviews and a short interview for you —  Stacey May Fowles starts off her new column in the Globe and Mail with this fantastic review of The Devil You Know. ICYMI earlier, here’s Sarah Weinman’s awesome National Post review. And a quickie interview I did with Mike Heffernan for Atlantic Books Today. Tomorrow, let’s all sleep in, okay?

Like Loading...
A quick video we shot here in St. John’s for The Devil You Know‘s American publisher, Simon & Schuster. A walk-through on what it was like to grow up in Toronto in the 1980s and 90s, a time that was deeply coloured by crimes later attributed to Paul Bernardo; why women read true crime; and why talking about it is more relevant than ever. (Special thanks to my dream team in production: Latonia Hartery, Ian Vatcher, and Christopher Darlington.)