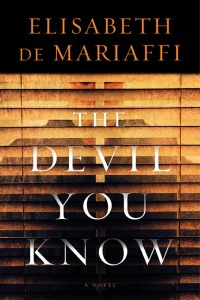 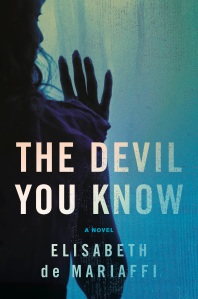 “The Devil You Know is a gripping literary thriller that will get under your skin and burrow into your every waking thought. You’ll see a little bit of yourself in Evie Jones, and you’ll find yourself looking over your shoulder even more after reading this creepy, chilling‎, and hauntingly beautiful book.”
– Chevy Stevens, author of That Night and Still Missing

“A first novel rich with menace and psychological depth, The Devil You Know transports in the dangerous way of a nightmare but remains grounded – even more dangerously – in the way of a documentary.  Elisabeth de Mariaffi delivers a thriller that thrills in so many ways.”
– Andrew Pyper, author of The Demonologist

In the vein of Gillian Flynn’s Sharp Objects and A.S.A. Harrison’s The Silent Wife, The Devil You Know is a thrilling debut about a rookie reporter, whose memories of the murder of her childhood best friend bring danger—and a stalker—right to her doorstep.

The year is 1993. Rookie crime beat reporter Evie Jones is haunted by the unsolved murder of her best friend Lianne Gagnon who was killed in 1982, back when both girls were eleven. The suspected killer, a repeat offender named Robert Cameron, was never arrested, leaving Lianne’s case cold.

Now twenty-one and living alone for the first time, Evie is obsessively drawn to finding out what really happened to Lianne. She leans on another childhood friend, David Patton, for help—but every clue they uncover seems to lead to an unimaginable conclusion. As she gets closer and closer to the truth, Evie becomes convinced that the killer is still at large—and that he’s coming back for her.

More praise for The Devil You Know:

“The Devil You Know is an exceptionally tense, thoughtful book, one which had me questioning my assumptions and checking my pulse. Elisabeth de Mariaffi writes in crisp, tight prose that pulls the reader through the story seamlessly, and it is a story that thrills, surprises, and above all else makes the reader rethink their assumptions about how women experience the world of violence. A magnificent debut novel.”
– Steven Galloway, author of The Confabulist and The Cellist of Sarajevo

“Take the wit of Gone Girl, the horror of Helter Skelter, the twists of In Cold Blood and the wisdom of Joan Didion’s The White Album and you feel the thrill of reading The Devil You Know. De Mariaffi has written a brilliant and thoughtful thriller that is tense, funny, scary, smart and true. Her clear-eyed insight into the kind of fear that women carry through life resonated deeply with me.”
– Claire Cameron, author of The Bear

“The Devil You Know manages simultaneously to be funny, sweet, hip, and utterly terrifying. Elisabeth de Mariaffi has written a smart, unique thriller.”
– Alafair Burke, New York Times bestselling author of All Day and a Night

“I read The Devil You Know all at once, in gulps, on the weekend. I was home alone — mistake. Every little creak and bump – even a leaf that blew against the window – made me jump.  I found myself turning off all the lights in the house, so nobody could see me. This story is creepy, dark, and addictive. It’s a really smart thriller —  and it feels true, which makes it all the more frightening.”
– Sarah Selecky, author of This Cake is for the Party

“Elisabeth de Mariaffi conjures an atmosphere that is both light and dark, familiar and off-kilter, nostalgic and hard-edged, and, ultimately, all the more chilling for being anchored in reality. The Devil You Know penetrates to the heart of female fear. You won’t sleep till you get to the end.”
– Carrie Snyder, author of Girl Runner

How To Get Along With Women (short stories) 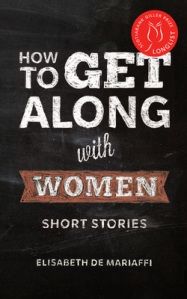 A sharply original debut collection, How To Get Along With Womenshowcases Elisabeth de Mariaffi’s keen eye and inventive voice. Infused with a close and present danger, these stories tighten the knot around power, identity, and sexuality, and draw the reader into the pivotal moments where—for better or for worse—we see ourselves for what we truly are.

Elisabeth de Mariaffi’s fiction has been published in The New Quarterly, The Fiddlehead, This Magazine, and The Puritan, and is taught as part of the short story curriculum at the University of Waterloo. A former host of the popular Pivot at the Press Club reading series, Elisabeth currently lives in St. John’s. How To Get Along With Women is her first book.

Praise for How To Get Along With Women:

“Elisabeth de Mariaffi is urgently trapping the ten percent of emotions that hardly get mentioned by anyone else. She’s alive to what disturbs, and she’s dead to cliché.”   –Michael Winter, author of The Death of Donna Whalen

“[In] Elisabeth de Mariaffi’s stunning first book, How to Get Along with Women… there’s a sense that the universe depicted … is just slightly off kilter, tinged by the threat of the surreal, and de Mariaffi’s prose doesn’t call any attention to itself — the experience of reading seems to go somehow beyond the language she’s using, dragging you deeper into an unknown world that you might just recognize as the one where you truly live. And yes, there are women there, so you might as well try your hardest to get along with them — though this book won’t quite show you how, it goes just a bit further than that and begins to tell you why.”   – The National Post

5 thoughts on “The Devil You Know”